Inducoat FUNGI is designed to eliminate mould and is the only coating with a Dutch authorization number - which is based on the strictest European regulations. Furthermore, Inducoat offers practice based evidence - e.g. with the Dublin City Council. "Since specifying the Inducoat anti-mould system, we have seen a sginificant reduction in complaints and maintenance costs". If you don't want to spend money on changing the building, but still want a durable anti-mould solution, Inducoat is the system of choice. Safe, ecologic and simple.

What does the system consist of?

The Inducoat system is based on a two-step method:

Even in the most harsh conditions, like bathrooms with serious building issues, the system offers long term protection against the growth of mould.

How does the system work?

The CLEANER is based on a biological degradable quartenary ammonium solution. One of the main advantages = low odour.

The FUNGI is formulated to be a high quality emulsion, suitable for wet conditions, with the unique Inducoat Slow Release System (ISRS) incorporated. The ISRS has been tried and tested by the Dutch government and has received the unique qualification of "highly effective against a broad spectrum of mould", "safe for humans" and "safe for the environment". Since it launch in 2008, the system has been applied in over 100,000 houses in The Netherlands. And since 2017 the Dublin City Council has approved this system as their standard to solve the tough mould-problem.

Where do I buy this system?

Brinia Coatings of Dublin is able to deliver from stock. You can buy the actual products on this site. Just make your choice and click below. Easy and safe. 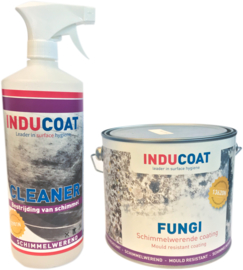